You might be wondering what in the world shinseki-don is. Perhaps you have heard of its relative, oyako-don.

Well, you can find a detailed explanation at the bottom of the post in my discussion with Astral, but why spoil it for yourself. Go ahead and read the recipe first! (This is why I don’t own a food blog.)

As you might know, I’m more of a baker than a chef. I get frightened by oil popping over the stove (totally not frying anything anytime soon). So take my recipe with a grain of salt.

If you haven’t checked out Astral’s last nigirizushi creation in our Shiritori series, do remember to do so! Unlike me, Astral’s a real chef.

***I gave precise measurements because some people find that helpful, but I hardly followed them myself, so do what you will.

And you’re done! Easy peasy, right? Now it’s time for a confession: it actually wasn’t so easy peasy for me, because I tried to make the Kewpie Mayonnaise from scratch.

And…this is how it turned out:

A note on Kewpie Mayo: it’s a lighter and sweeter variety of mayonnaise popular in Asia. It’s amazing in sandwiches and potato salads, and in this mind-blowing dish called “pineapples and shrimp balls” that I used to have in Taiwan.

It’s made by emulsifying egg yolk and oil, plus some other minor ingredients. The trick is that you’re supposed to pour oil into the mixture slowly, with patience. And guess what, patience is probably a virtue I’m never going to have. So yup, my mixture separated, and no amount of hot water or extra egg yolks could save it.

A note on butchering recipes: never, NEVER throw your mess away! While I used standard mayonnaise to garnish my shinseki-don, my homemade “mayonnaise” still had the right taste, so I stirred some into the shinseki-don while it was still in the pan. Made it extra sinful.

As for the rest of the mayo, I baked it into coffee cake, along with some blackberry jam I made a year ago. Yup! Mayonnaise is a wonderful cake ingredient, and can be used in place of oil/butter to make your cake ultra moist without causing it to lose its airiness.

Chatter over the Platter

You might be wondering, why mayonnaise at all? Let us first talk about oyako-don – chicken and eggs over rice. But there’s a darker side to the name that is lost in the romanized transliteration. Oyako-don is written in kanji as “親子丼.” Well, the don part means rice bowl, and oyako literally means “parent and child.” When I was young, I used to think it was a dish meant to be shared between parents and children, but no. Next time you eat oyakodon, do remember that you’re eating a parent (the chicken) and their child (the egg).

As for shinseki-don, it’s an odd variation invented by Tsukasa in the first episode of Lucky Star, featuring not only chicken and egg, but a generous ring of mayonnaise to polish things off. Guess what shinseki (親戚) means? It means relatives! Because mayonnaise is made with egg yolk and all…Yup. 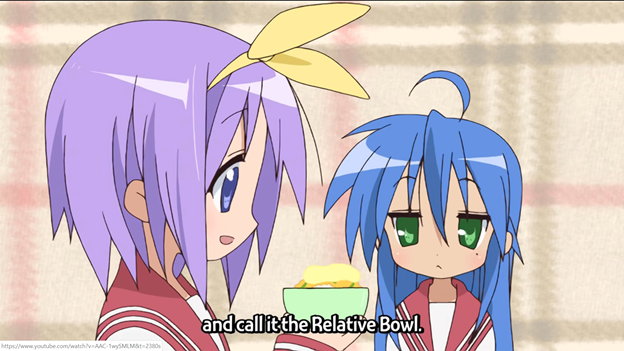 You know, the naming of these dishes might sound kinda cruel, but it’s not so out of place either. After all, the Japanese, like literally everyone except English-speakers, say “pig meat” instead of “pork” and “cow meat” instead of “beef.” No need to sugarcoat the fact that we’re eating animal flesh, right?

Yeah, Japanese people don’t really pull their punches, do they? I guess it’s just a cultural thing… or maybe just a matter of how the language works? Well, the name aside, it sure does look delicious. Leave it to Tsukasa to create something equally as adorably innocent and strikingly dark, though… Lucky Star is something else.

Lucky Star is a bit of an interesting show, though. You could say it’s one of the series that’s made an enormous cultural impact, specifically around Saitama prefecture. I wouldn’t be surprised if the “Relative Bowl” is eaten pretty widely in that area.

I wasn’t surprised to see lots of shinseki-don replicas that are prettier than my own on Twitter! I’ve only seen a smattering of Lucky Star episodes myself, but the first one was certainly impressionable in its own way. Chocolate cornets still make me philosophize…

So Astral, sorry it came down to “n” again…but what ideas have you got?

Hmm… I think i’ll go with “do” this time, because N is a bit tough to work with. I have a few ideas off the top of my head, but nothing especially concrete so far… I’ll figure out something though, rest assured!!

Well, it’s Astral, so I am always assured!