This episode was plenty of fun. No pre-content rambling from me here today, let’s just get into it.

I thought we were getting off the stinking mountain (to reappropriate some words from one of the Kakushi) last episode…I guess I probably should’ve seen that Rui backstory coming, though.

A pretty solid episode, honestly. It’s sorta nice to be back to some of the lighter character interactions now that the threat of Rui and the spider family has passed.

I appreciated the Rui backstory, and enjoyed the interactions between Tanjiro, Giyu, and Shinobu. And Shinobu’s little sister is cute.

Did not anticipate the Shinobu attack, or how earnestly Giyu reacted to everything. I still don’t completely get Shinobu, and I think that’s a charming thing about her.

Hashiras gotta be Hashiras in front of Tanjiro…whatever that may mean. Hopefully there’s some kind of lifted sanction for Nezuko, since I sure as heck don’t wanna see her get killed.

I’m guessing the Hashira would hold some sort of council meeting to decide what to do with Nezuko, which doubles as an opportunity for us to see what their personalities are like. Unless they did that already and all of it happened while Tanjiro was unconscious.

When it hit me that “the other one” Shinobu was referring to was Kanao. I didn’t think she’d show up so soon, I guess…*suddenly worries about when we’ll next see angry-for-the-sake-of-angry Final Selection participant (for the benefit of the caught-up, his name is Genya)*

The mini Nezuko running away has totally taken the internet by storm… Adorable and hilarious, 100%. 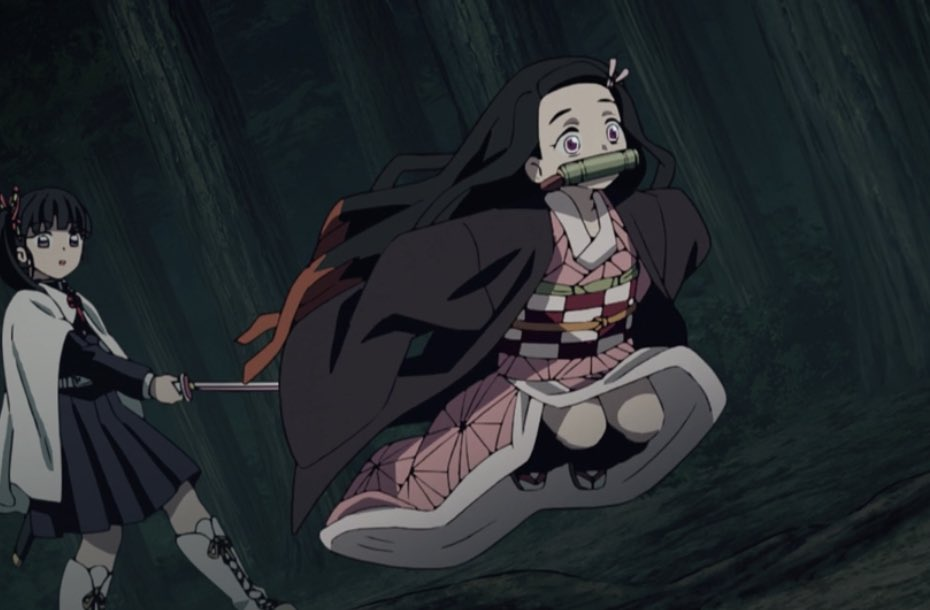 Shinobu calling Giyu out on his lack of popularity. Brutal enough for me to spit my tea, had I been drinking any.

Can I make this a combo pack? Because I love the interactions between Shinobu and Giyu… They’re so different, but have this weird rivalry/friendship going on.

When Tanjiro wakes up to see every Hashira bar Giyu (the one Hashira who’d ever stand up for Nezuko in a tussle, as we found out this episode). Continuing from last ep, it’s another big “oh crap” moment.

Man, that Hashira reveal was well-done. A really nice climax in an episode that really didn’t have much action, a nice cliffhanger leading into the next episode.

The crow intervention that stopped anything crazy from happening. Shinobu was really gonna give “heel prick” a new definition…

Maybe make it clearer (through language, the visual stuff was fine) that “the other one” was Kanao.

It felt a tad slow-paced to me. Maybe that’s just because the previous episode was so exhilarating, though.

I thought Rui’s redemption was really touching (especially when his hair colour reversed), and I was buying every bit of it until he let out a very bad sob. Can’t be too harsh on a guy for sobbing disharmoniously, I guess.

It occurred to me that Kanao was wearing a skirt to go demon slaying. It’s said you should “[n]ever wear your best trousers when you go out to fight for freedom and truth” (Henrik Ibsen) and this ain’t Strike Witches, so…whoever’s responsible for such a decision (I don’t know who to blame for this), please make sure she wears something underneath, rather than dodging the scenario like with Nezuko.

I feel like Shinobu was a bit vindictive towards Nezuko, especially when Tanjiro and also Giyu, another Hashira, were working hard to keep her safe. Even if I hated demons a lot, I feel like I would have at least been curious and wanted to know more about the situation.

Pity your enemy all you want, Tanjiro, but dammit, stab that syringe into Rui before he dissipates! What a waste of a perfectly accessible blood source.

Nice scenery and Ukogi in the same screenshot…that’s the best compromise I can make for this show, really.

More than anything, I just find this scene amusing. Nice lighting on a good duo.

Is harder than it looks when

Rui and Nezuko remember their childhoods at the wrong moments.

It looks like Taisho Secret is our current trend.

Giyu is getting pretty popular these days. Granted, he may never topple the popularity of Smol Nezuko, but I do enjoy the Giyu memes and/or fan-art I’ve seen.

Now, I’ll let you in on a Taisho Secret!

I saw Giyu in my neighbourhood a few days ago!

(I was listening to music on my walk and I very nearly crushed him.)

Well, anyways, that’s it for today! Coming up next: the Hashira confrontation.