This episode has who I think is the most likable villain so far, and I’m happy I got to post it.

Aside from Zenitsu’s bit (where I kept noticing the use of his CGI model), it’s a return to form for Demon Slayer.

I’ll be honest, as much as I think Kyougai is a cool villain with cool powers, his arc was pretty slow-paced, with not a lot happening each episode. This episode I feel marks a return to form for Demon Slayer, as the pacing seems to really be picking up again, and giving us some nice action as well.

Finally another strategy battle (probably the most complex one yet), and a villain I actually empathized with completely!

I feel like this episode wasn’t….that good and exciting as even the last, for some reason. Maybe because we’ve come to expect something more from ufotable, hmm.

Pretty much. I just didn’t expect Tanjiro to change his form in mid-air.

I’ll be honest. This is the first time I felt an episode truly surpassed the Manga equivalent. Especially near the end of the episode, they did such a stunning job with the spider mother. It’s a beautiful skill to be able to build sympathy with a character so quickly, and make such a touching, beautiful, sorrowful scene with just a few minutes of screentime, some lovely music, and of course the gorgeous visuals. Well done, Ufotable.

I was worried about how Spider Kaasan was getting killed off in a clearly pitiful way before any sympathetic background was given, but the way they fit the flashback into her dying moments hit the point without being excessive.

Yes but also no. It feels too short, for whatever reason. Maybe the pacing’s slightly too fast? Hmm…

I knew there was a spider father and brother from promo material (i.e. Anime News Network articles) and we haven’t seen the end of Rui yet, so I sort of anticipated this not being the end of an arc. Since Astral mentioned the Hashiras for last ep’s post, this is just speculation, but…maybe they’ll show up soon and Zenitsu will tip them off as to where they should go.

Hoo boy, we’ve got some crazy fun stuff to deal with coming up. In the words of that one guy from Jurassic Park: Hold onto your butts!

Spider girl…the only good one in an abusive family that we got a glimpse of in the flashback. I hope she gets a gentle death…

When that body appeared. I assume it’s a demon’s or very large, muscular human’s, but it made me curse in my notes (I did censor myself when typing it though) and I think that warrants a mention.

No joke, I actually teared up at the end of the episode for the spider mother. That scene was just… so lovely.

Spider mom changing her mind about evading the attack (and to a lesser extent, Tanjiro changing his mind about the form of attack). Her voice actress was amazing.

Seeing the other people’s neck get twisted. Damn, really made me feel a bit sick. And also, sound effects for this episode are on point. All the bone twisting sounds and shit really make me cringe.

I’m just going to default to Ukogi again, since this is clearly a transition episode. I’m still not particularly attached to Inosuke, although we learnt this episode that he and Tanjiro are becoming better buds and even the spider mother didn’t do anything I got attached to, even if I did like how her death scene looked.

For the first time in a while, Tanjiro. I respect his decision to give the spider mother a peaceful death, even after the pain he watched her cause.

Spider Mommy! I love her character design and voice, and she managed a convincing character evolution within a short screen time.

The spider mother’s death scene. Man, it looked beautiful with the light streaming in!

That death scene really stole the show, to be honest. What a beautiful scene, maybe the best scene in the show so far, honestly.

Obviously, what those two have said. ^

Again, where do the birds hide when they’re not helping Demon Slayers out? Ukogi seems to appear from nowhere this episode.

Not much. A fantastic episode.

Small thing, and one that most shounen anime are susceptible to: some movements can be more varied, especially during fights. I noticed that the spider threads didn’t really move as Inosuke and Tanjiro rammed into them at certain points, and the puppets sure paused conveniently whenever their opponents had longer chunks of dialogue!

I love Tanjiro’s decision to give the spider mother a peaceful death. Being able to show empathy to someone, even who you know is a killer, warms my heart, and I would hope I could be as kind as him. 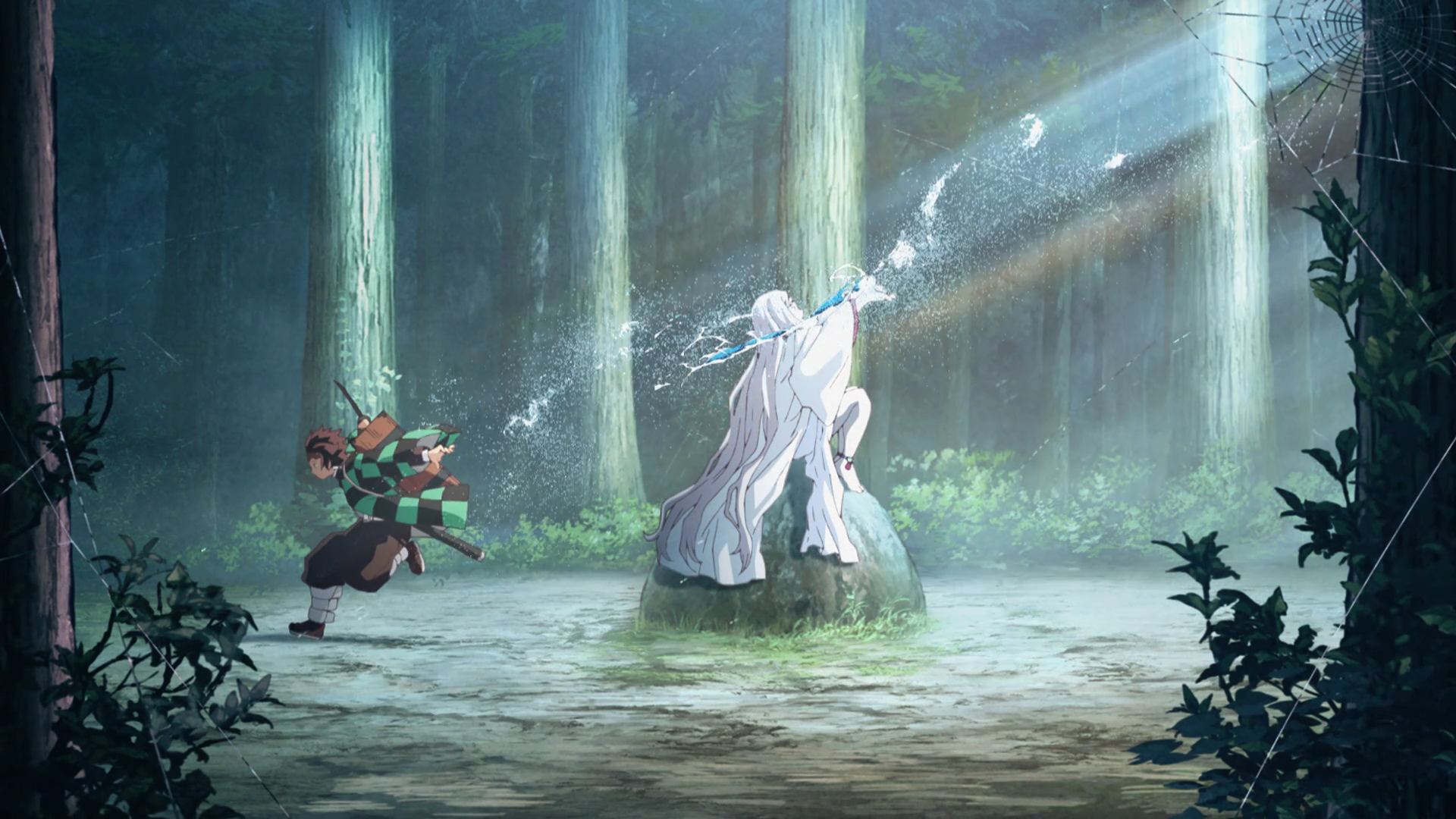 Well, I’m apparently the cool cinematic shot guy, so here we go. The light, the zoomed out angle showing the faint trickle of water near her neckline, and the fluttering bots of ash in the wind as her life begins to expire. Dark, creepy looking trees and spiderwebs in the foreground, framing the shot. Gorgeous. 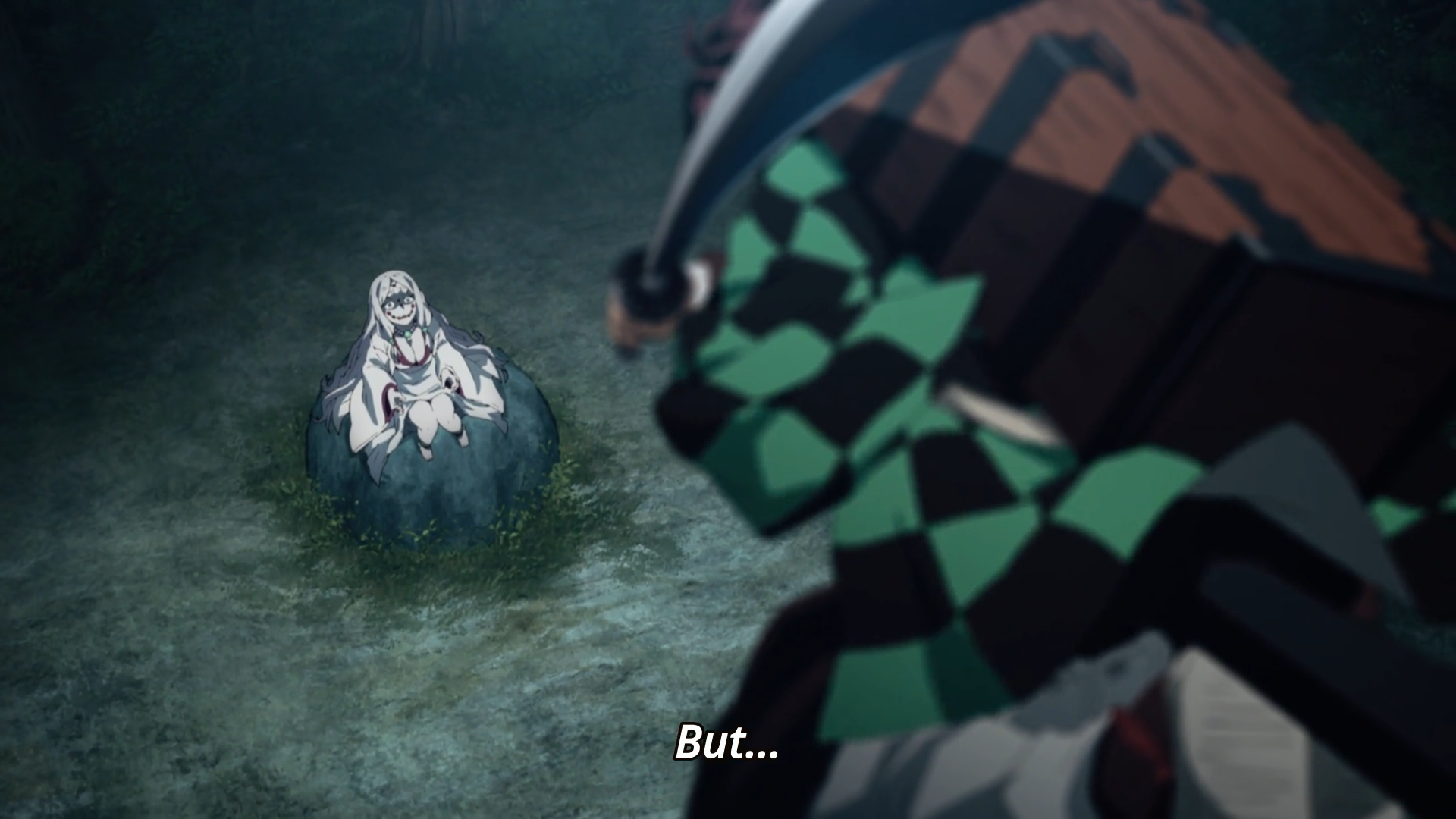 My two other choices were both taken (great minds think alike), but I do love this shot. I like how the red dots on Spider mother form a scary artificial smile. 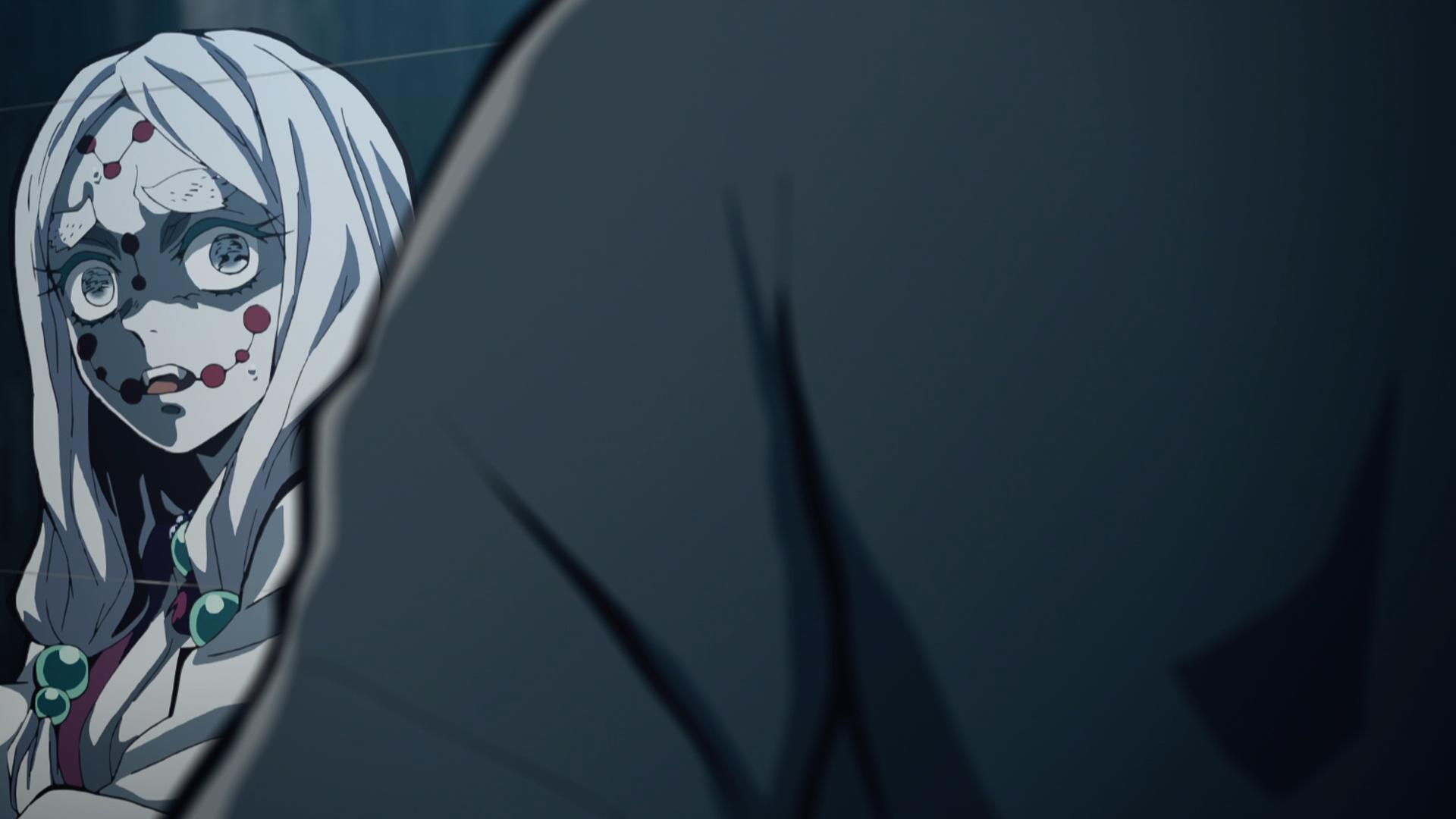 Why do you think this shot of the mother’s terrified face is done with Rui’s body covering most of it in the foreground, while the rest of them are done with the face as the focal point?(See: Terrified face of Female Demon Slayer and Tanjirou respectively).

that’s much harder than it looks.

Tears become ash in the wind

Was victimized too, so please

Cut down this cycle.

Time for our favourite segment…

Ahem, there seems to be a consensus that Episode 19 of Kimetsu no Yaiba is phenomenal. Everyone’s gushing praise for it on Twitter, and Astral and Aria have both agreed on its hype value!

Moya feels bad for not having seen it… It’s so hard to be caught up on anime when you have so many life things to deal with, deshou Nezuko?

Wait a minute Nezuko…don’t you know the whole plot already? Including how the manga is going to end?

Or do you… Is the Nezuko at the end of each episode intra- or extra-diegetic (in other words, is she inside or outside of the story)? How meta is Taisho Secrets Nezuko??? She literally jumps out of a manga panel from the story to comment on the story! Just how much does she know…?