Happy July 24th! You ask me what’s happening on this day? Well…nothing in particular as far as I know, but I’m sure we can find a reason to celebrate on Foodimentary – oh guess what, it’s National Tequila Day! I refuse to drink any alcohol that isn’t sweetened, and this certainly doesn’t relate to the episode in any way, but congrats if you celebrate this holiday.

Woot! More worldbuilding, more Kasugai crow (although he scared me for a second) and more butt-kicking.

Man, the combat in this show is always just so good. Tanjiro being a good boi aside, Inosuke and Zenitsu finally get to show their chops in this episode, even if the latter is still irredeemably obnoxious. #bringbacknezuko

Very nice overall, yet again! I can’t stress enough how much of a good cast Matsuoka is for Inosuke. You can just hear the crazy in him.

I expected more Kyogai, but not the other 2 demons. I even managed to correctly guess there was a “double personality” element to Zenitsu that gives him butt-kicking ability, but I didn’t expect there to be so little emphasis on the boar baring his fangs – the literalness of the “Zenitsu sleeps” I could take though, since it’s happened before.

I didn’t expect Teruko’s brother to be alive, but I like the desperate cleverness that kept him alive.

Yeah, pretty much. Though i’m still weirded out by the change in Inosuke’s signature line… even if Aria did try to explain it to me.

It sure did. Very good action, continuously brilliant voice acting, the 3D maneuvering of the animations was absolutely top notch, as expected from ufotable.

More waiting for Kyogai to get his butt kicked on our end – the arcs are starting to get longer the more the stakes rise. If I can add some wishful thinking to this post, then we’ll get to see Zenitsu’s sparrow sooner rather than later.

I’m just so excited for some of the upcoming fights. However, It’s also a little sad, because Kyougai’s blood demon art is seriously one of the coolest in the whole series. Wicked awesome.

I’ve pretty much forgotten the events that happen after this so hmmm iunno, but good shit.

Zenitsu kicking some demon butt. The “double personality” thing only works if the buildup pays off – you have the character backed into a corner and they’re in despair, when suddenly wham! Trigger activated, butts kicked.

Tanjiro’s little “oldest brother” speech to himself. As a firstborn myself, I kinda understand that mentality, even if the little dork was a bit over-the-top with it

Laughed a lot at Zenitsu.

It seems (to my horror…?) Zenitsu’s particular brand of humour is growing on me a tiny bit – the Zenitsu in Tanjiro’s imagination is the closest Gotouge’s gotten to making me (intentionally) laugh. I’ve mentioned in some of the other questions as to what he’s done, although the gimmick runs a risk of getting old fast if you can’t use it in inventive ways.

Inosuke, brief though his showing was. He’s hilarious in his randomness, but also one of my favorite characters in the series.

Tanjiro getting psyched up to get him some demon butt. While he was noting how the odds were stacked against him, I made some parallels between his negative mental state to work fatigue in my head and started to cheer him on. Like I said about Zenitsu last time: be proud of how far you’ve come, Tanjiro!

Siblings trying to survive. Not particularly climactic, but they’re adorable kids and they’ve already dodged death for longer than possible.

The way they did the spinning room. Such a delectable piece of animation…

That 3D manuevering with the room. BET YOU DIDN’T REALISE IT WAS 3DCGI, HAH GOTTEM

Where was the crow hiding before he yelled (and scared the living daylights out of me)? I’d assume he was inside Tanjiro’s green jacket somewhere, but I’d like to have some proper confirmation.

Also (and this is a bit of a tall order, because the way the question is worded means there’s only meant to be one low point), when does the anime first mention the kid Zenitsu is protecting is called Shoichi?

Nothing! (What a surprise.) I am curious as to why there are other demons in a house supposedly owned by Drum Guy, but that probably just means that his claim was wishful.

I don’t really see much that needs to be improved. A very, very good episode.

I wish the episode was longer to carry on the momentum we had at the end of the episode, but of course it ain’t happenin.

You know… If I had been kidnapped by a crazy drum monster and locked in a death house, I don’t know that I would have kept my cool nearly as well as the older brother managed to, grabbing the drum and warping himself around to stay safe. Kudos to him. 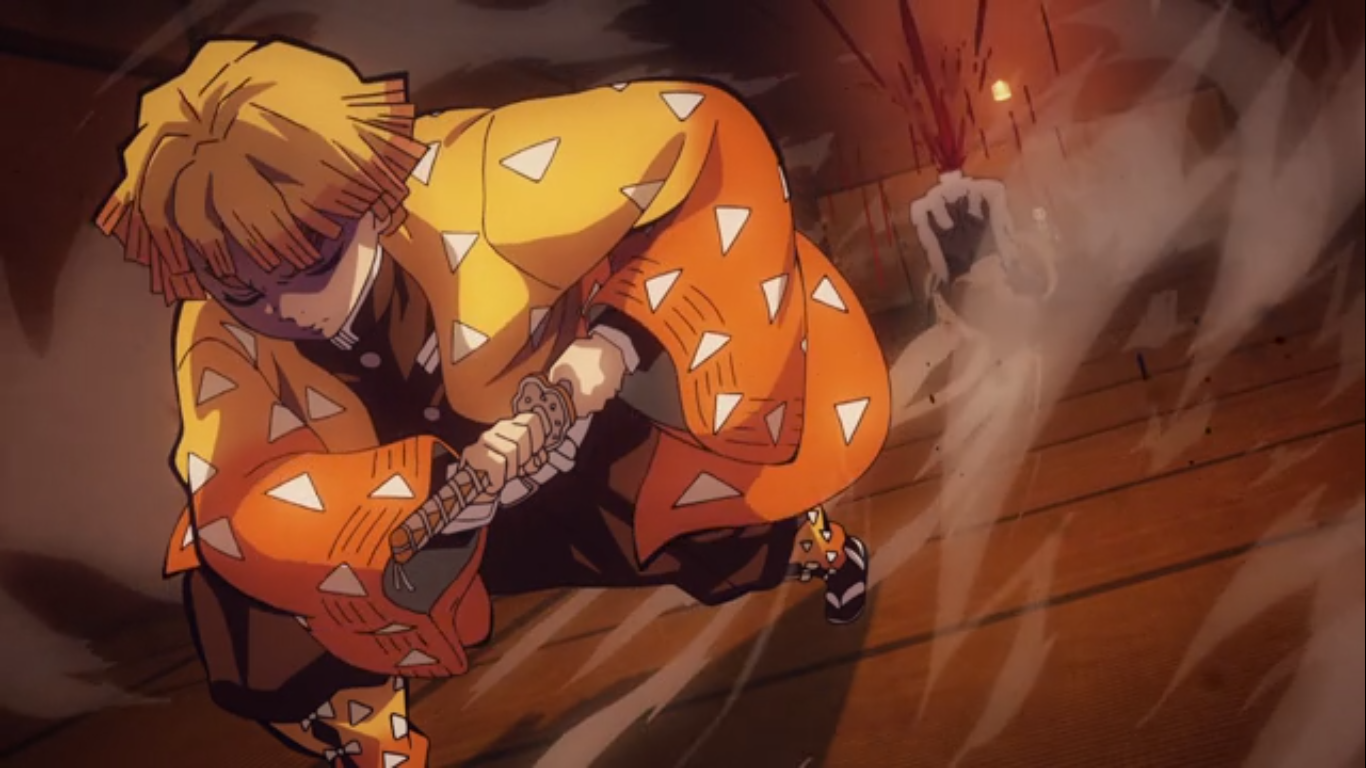 My original answer was meant to be a shot of some sliding screens which only appear for a second in the earlier half of the episode, but it turned out they were far too (visually) dark to appreciate. So instead, I tried getting Zenitsu’s lightning into the shot and ended up with some nice camera angles and tasteful gore…with the added bonus that you can see his eyes look a lot like Muzan’s when he’s being badass. 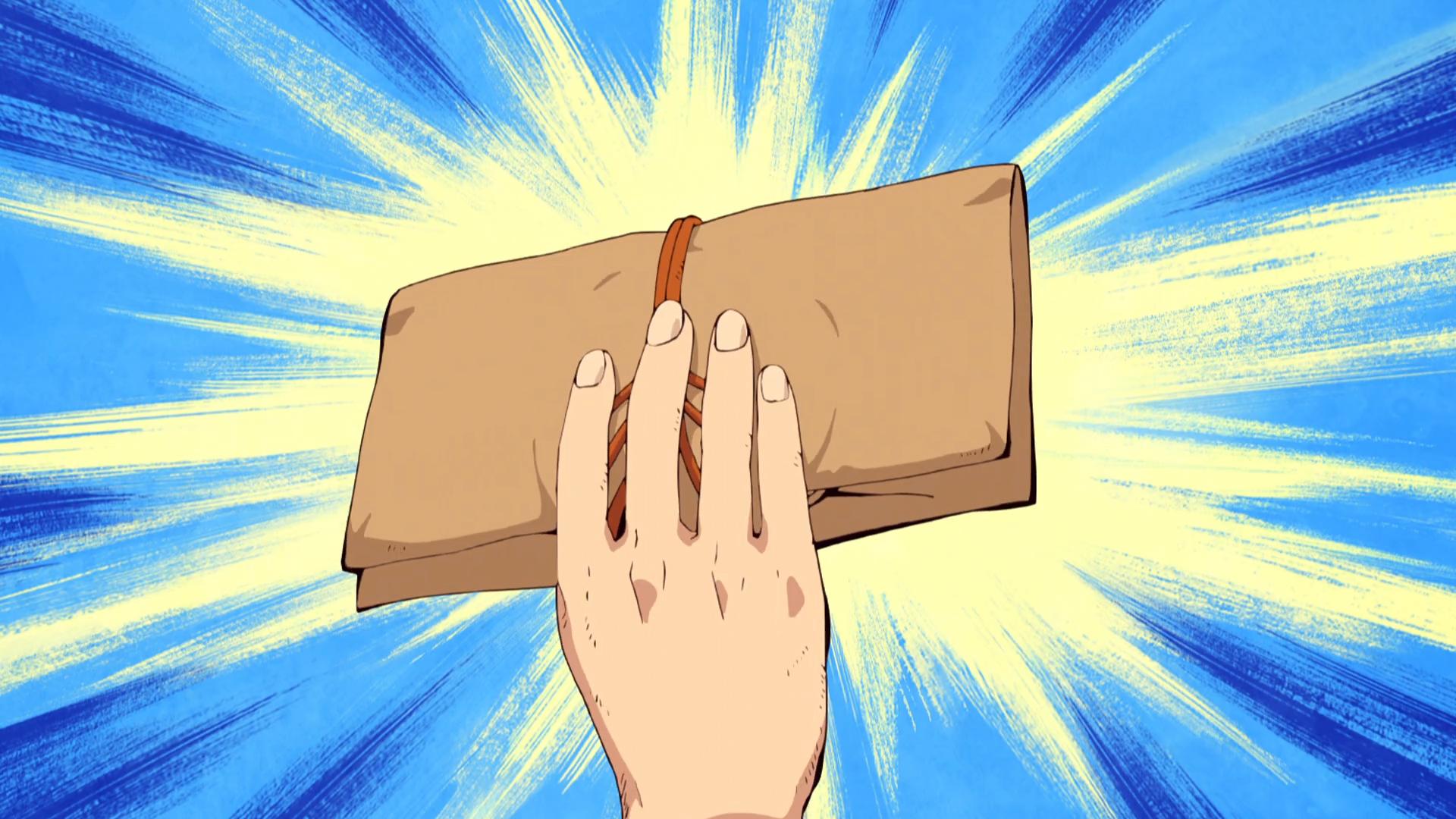 If you don’t get why this scene is amazing, you need to get a childhood.

I will now proceed to depart from scheduled programming with a set of parody lyrics (because I can’t resist and because I’m ahead enough of our schedule to get away with it) *erhem*:

Zenitsu’s Breath was lightning (kind of!) –

So? The crow was worse in timing…

(…you expect me to parody the entire song? I’ve already overstayed my welcome here, so…no thanks.)

Argh! If only it weren’t Breath of Thunder, I would’ve gotten away with that stupid joke! *shakes fist at kanji which can’t be “lightning”*

Michael Jackson’s backup drummer, Orochimaru, and a fat guy walk into a mansion… (I’m already over the word count so there’s no punchline)

The joke here is that both Kirito and Inosuke dual wields swords. ( ͡° ͜ʖ ͡°)

That’s the end of this discussion. Annnnnd, now, for the segment that I’m sure you’re all eagerly anticipating:

Take a look at this collab title! If you look hard enough, you’ll see that it says “Demon Sayer Corps” instead of “Demon Slayer Corps”! This is not a typo, but in fact a pun that Ply thought of, because get it? We chatter a lot?

I know, I know… Now this is the secret: when Moya first posted Episode 1 of the collab, she totally forgot about the pun and spelled it the correct way. Thank goodness nobody noticed!

Wait, then was there a point in making this pun in the first place??