Hihi! Happy July. We’re slowly catching up with this show, isn’t that neat?

I’m pretty happy with what I got, as always.

Any episode with action is a good episode in my book. The quality/intensity of fights only goes up from here on out, so there’s plenty to look forward to.

I’m not enthusiastic about fights with evil subordinates, so only a few moments got my attention. I fast-forwarded 5-10 seconds whenever a character started spouting unnecessary comments mid-battle.

Well, in a way yes and in a way no. I knew what was coming, but man, do those battle animations get me every single time…  So smooth, so colorful, and the style gives them such a unique appeal.

The fight was fairly predictable, but the brutal gore surprised me! Nezuko’s foot and flying heads (Yushiro’s head loss scene even got a recap within the same episode!). Good stuff.

Still gotta slay them demons. Considering Susamaru mentioned she and Yahaba are on a higher level than the previous demons and Tanjiro acknowledges it, it might take another half or whole episode, but I have faith in him that he’ll defeat those two demons. The manga wouldn’t be ongoing if he weren’t capable enough, after all.

There are TWELVE of them? Goddammit. More fights, I guess…

Well, I can only say that things really start to spice up from here on out… especially when the 12 moons actually start showing up to play.

When Tanjiro admitted Yahaba’s eyes are creepy. I guess we were all waiting for someone to say that…

Yushiro’s head getting blasted. I wanted to scream “oh no!” and cheer at the same time.

Watching Nezuko and Tanjiro having each other’s backs. That was super nice.

Strangely, Susamaru. She’s kinda static in her characterisation, but she seemed like the biggest threat, even if Yahaba was the one behind her temari (<-plural) moving the way they did.

When Nezuko knocked into Tanjiro. This show’s good at foreshadowing, as I’ve mentioned in the past, but when Yushiro said “watch your back” to Tanjiro…that was a whole new level of foreshadowing…

The collaboration between Tanjiro and Nezuko was nice, this time more strategic than usual. I also enjoyed the small bit of strategizing on Tanjiro’s part near the end.

Honestly, the way that CG was used in this episode. It’s so hard to get those incredible dynamic shots during battle using only standard animation, since it takes so many immensely detailed drawings to make it look good. Ufotable are really masters at using CG in tasteful ways to accentuate action scenes, and it really showed in this episode.

I know our demon slayer and his demon friends only put that man into the basement in the last episode, but does Tamayo have to point out she has a basement again…? I think I understand your gripes about the script now, Moya…

Is this a good time to air one of my long-standing questions about this series? The arms demon (the one who grew arms out of his head) was suggested to Tanjiro by Urokodaki as being able to be beaten if his head was smashed with a rock. But now we’ve heard that only sunlight or the special swords can kill demons? And Yushiro basically gets his head smashed but totally regenerates it afterwards.

Susamaru being evil in the corny way. Also, the beginning of the episode chose to recap the most cliched villain lines ever – “we’ll kill them vindictively, of course!” And both Susamaru AND Yahaba take turns questioning each other and coming up with the same answer. In Japanese, it sounds slightly more clever because the word for vindictive is “zankoku,” which shares the sound “zan” with the name “Muzan” (*“merciless”). It’s still a fairly pointless line, but in English it’s just, ugh.

If I were Tamayo, I wouldn’t stand around. I’d use that Enchanting Blood thingy and get my butt out of that scenario before Yushiro or Tanjiro were able to help me (because remember, Nezuko was busy protecting the lady and Tanjiro needs Yushiro’s skills to see the arrows, but Tamayo can fend for herself).

This is basically the first fight in the series where the demons actually stand on somewhat equal footing with the humans. What I mean is that, in contrast to the previous demons, these ones both use Blood Arts, and also strategize, which makes them a league more dangerous than their previous foes.

Say what you will about how sketchy that cloud looks, the cherry blossom trees are still really pretty and the house looks appropriately creepy. 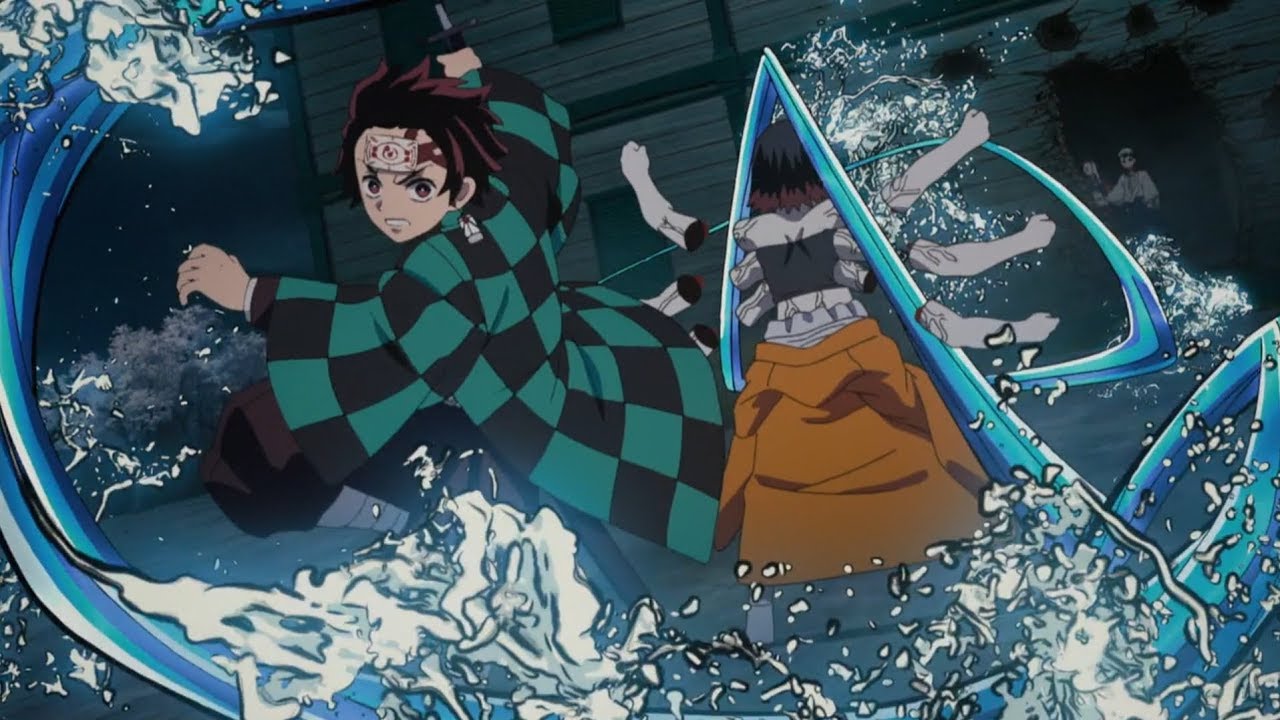 I’m a simple man. I see that water animation for the blade, I like. 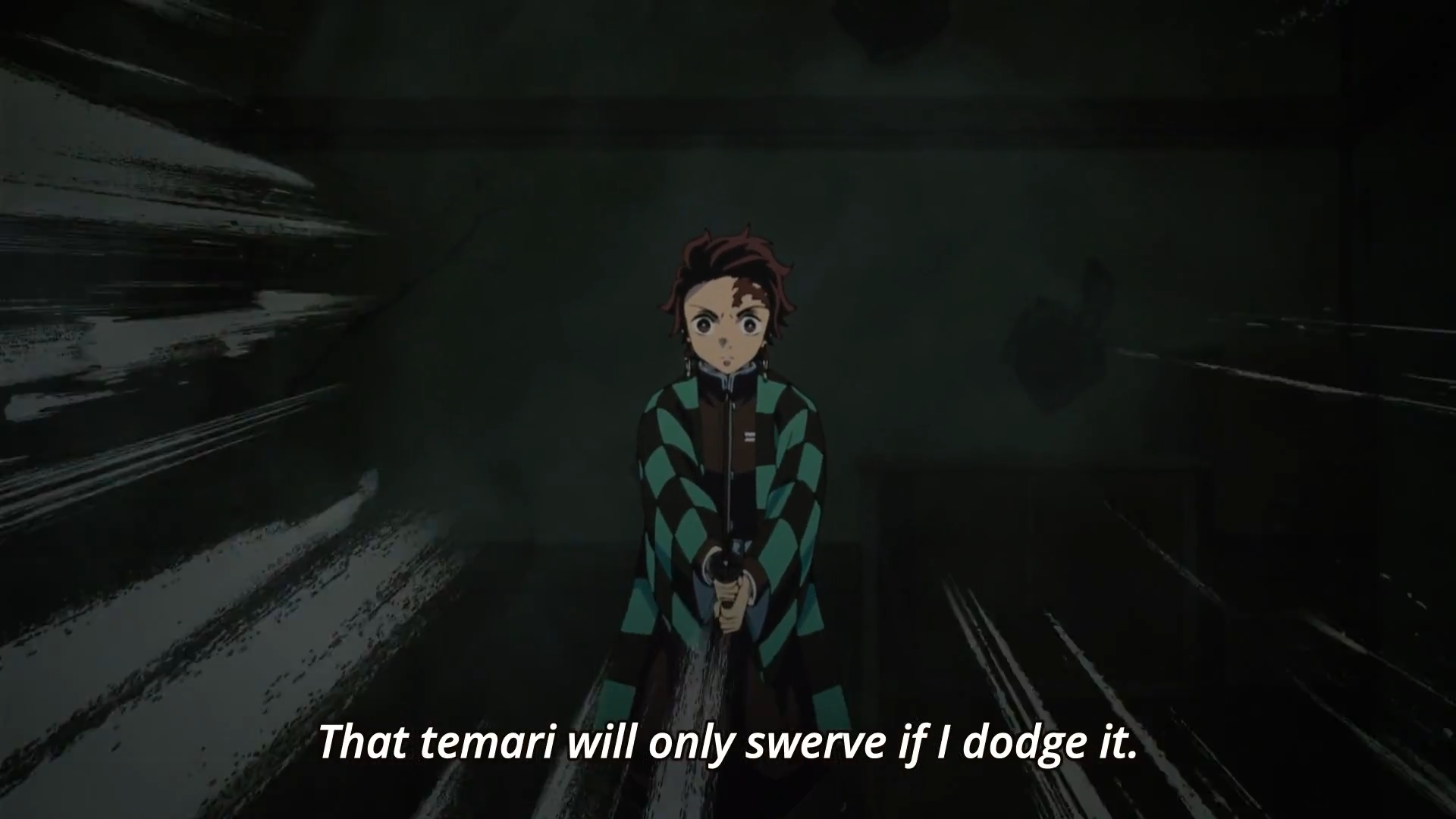 Demons on the attack!

Off vectors and balls.

Two down, ten to go.

That’s the end of the post! ~Cue ending song.~

Now it’s time for the Anibloggers’ Secrets segment! Today’s secret: *loud whispering* did you know that Aria already has a powerful harem planned for the day she gets hit by a truck and enters an isekai? All the power to her!