Unsurprisingly behind we are. A reminder of who’s who and updates from everyone:

1. What are your general thoughts on this episode?[Mandatory]

After the high, the show has to come down somewhere…and it went down about here. Not to say that Kimetsu no Yaiba is bad – after all, it’s consistently great, so its lows are still comparatively high compared to what I’ve seen of most of its competition.

It conveyed the plot that it should and did so in a satisfactory way.

Another fantastic episode. The animation just keeps blowing my mind every time I see it, but the story is great as well.

Pretty good interlude type episode, we are getting to know more about the context of Kimetsu no Yaiba, and at the same time more characters introduced and character development, yay!

2. Did the episode fit your expectations, and in which ways did it differ from it?(If it does) [Mandatory]

For some reason, I expected Haganezuka to pop out of the next-ep preview panels. Otherwise, I guess I didn’t really have any expectations outside the continuation of Final Selection.

I was surprised by the amount of ranks there are. Wow, this series sure is setting itself up to be a long-running shounen.

Yeah pretty much. Again, after catching up on the manga, the story itself doesn’t surprise me much.

Expectations fulfilled. However, there seems to be many more fleshed out scenes that were brought past quickly in the manga. I like it, it’s better this way.

3. What do you expect to happen from here on out?(and why) [Mandatory]

Tanjiro gets to slay a girl-kidnapping demon…Hopefully he actually gets to talk to it this time.

Two-episode demon-hunting arc that leads to critical piece of info.

I completely forgot about Tanjirou’s first assignment by now so uh, iunno. There’s gonna be cool fights though.

The scene where Tanjiro grabs the Hand Monster’s…uh, hand. I can forgive the fact Tanjiro happens to look exactly like this demon’s (previous…?) brother because the scene shows empathy is what shonen protagonists need, even above friendship, hard work and victory. (I’m thinking about that mostly in relation to what I’ve argued in this post of mine.)

That scene of Tanjiro and Nezuko finally being reunited… so good.

Tanjirou getting wrestled by the sword maker. I really like him.

Zenitsu was a better attempt at comedy than what’s been previously done. He seems to be a sort of character who might be less entertaining over time, due to the repeated “why am I here???” or “why am I the damsel in distress instead of [insert girl’s name here]???” hinted at in the OP, but at the moment he’s tolerable.

Tanjiro was very sensible and not talkative at all, so I’m proud of him. He did wail a bit, but as a shounen protagonist, he is entitled to do that sometimes.

Tanjiro has really grown an exceptional amount over the past few episodes. It was nice to see him reunite with Nezuko, but it was also nice to see just how much he’s grown.

Sensei was great. He shed tears when he hugged Tanjirou and Nezuko.

(Basically my answer to question 4…again.)

Nothing stood out too much this time. Possibly the crow’s entrance *cue epic music*.

Gonna pull an aria here and refer back to question 4.

The sword sounds. I have to commend them, all the sword sounds are very satisfying in this series, and it was the most noticeable in this episode. My ears enjoyed it.

I’m kinda grumpy at how they didn’t explain the significance of the black sword. I mean, symbolically Tanjiro has to be associated with black – it’s the colour of charcoal – but that doesn’t make much sense in the context of swords.

The finishing off of the morphed demon bored me, though I didn’t mind the inclusion of a sentimental flashback. Half of it was recap anyway, and the demon lacked any memorable lines or design. I guess I just really hate fights, and recapped ones make them worse.

Not much for me, honestly. I think the anime is actually nicely improving on the manga itself, so that’s pretty satisfying right there.

I think I’d be slightly more social than Tanjiro. A girl who seems good with animals! How interesting (and useful) is that? And the traumatized kid…he’s probably the only one who thinks deeply about things in the Selection. Even that swordsmith monk guy seems to have so many cool things to say! I’m a shy person by nature, but I think I’d at least give these people a chance…

I dunno. Knowing myself and my propensity for accidents, I’d probably have kicked the bucket long before this point anyways. 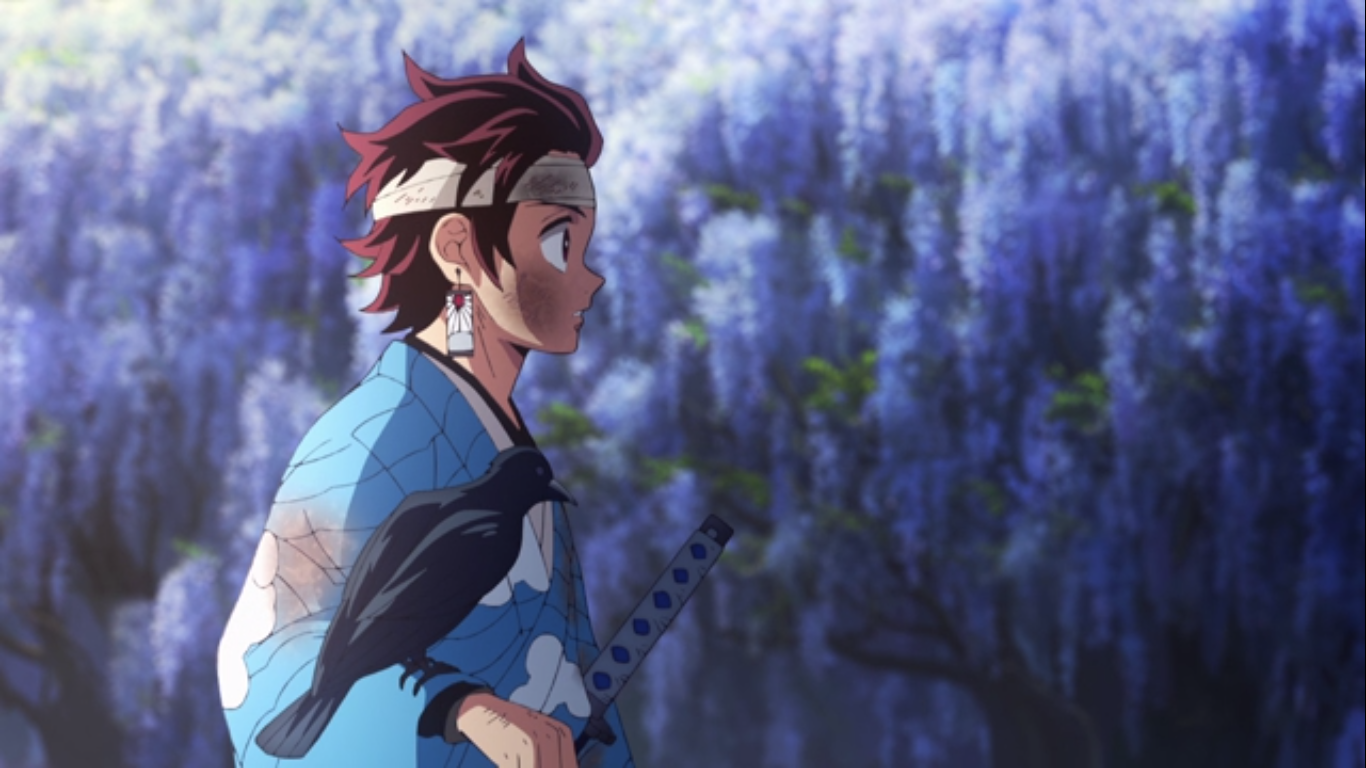 The wisteria has previously been shown to be pink (even within this episode), so seeing the blue wisteria really was alluring (in an aesthetic sense). Also, if I could get away with it, I’d be showing you pictures of nice scenery every collab post, but…I managed to get this nice shot of Tanjiro, so I changed my mind. 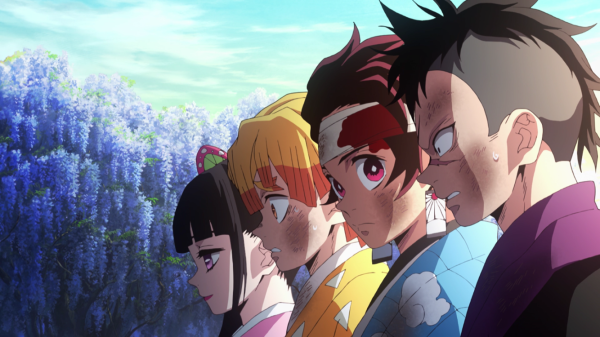 I’m a big fan of the framing here. The lighting, the darkness of their faces, and their expressions tell a lot about what each went through during the test. 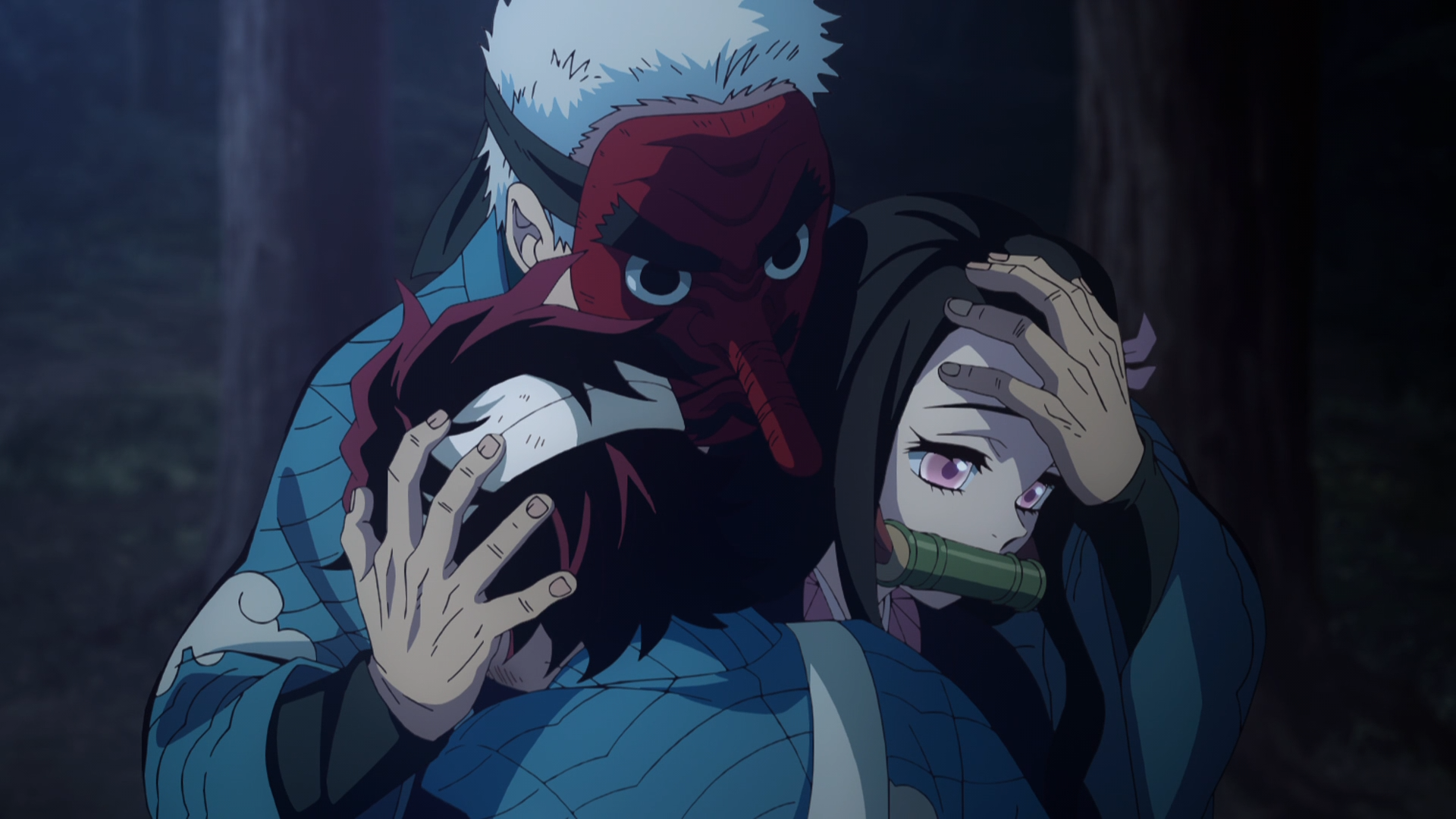 Nice. And the frame right after this shows sensei’s tears.

Talk to demons re: his sis…

Boundary between humans, demons (and also birds) now in question.

Thanks for reading *bows*. Please expect more frequent episode discussions from now on.