(3 months later…) Oh hey, isn’t this collab thing still going on? Without further comments or apologies on how long it’s been, here is Toradora! 15, brought to you by Negative Primes and Moya.

Finally, we have Kitamura-centric arc! That being said, this episode has done little to explain his crisis (why he bleached his hair or why he’s running away from home and the student council). The greater focus is on the reactions of those around him.

Primes: Oh man, what a Zenith in the plot! As off-the-wall as this episode might appear at first bounce, one can’t deny that moments like this draw the many complex threads the series is weaving into a single brilliant note.

Or maybe I’m just partial because I identify with Kitamura. 😋

What a surprise! Primes as Kitamura… huh, I’m starting to see that.

First, Ami. Ami blatantly dismisses Kitamura’s actions as escapism and makes fun of his hair. Her attitude must be founded upon her deeper understanding of Kitamura and his background, as his childhood friend, but Minori offers the secondary interpretation that Ami sees things from a more mature perspective due to her career in the “adult world.”

Primes: Do you think Minori really thinks that of Ami? Minorin seemed to me to be so anxious about Kitamura that she was willing to grasp at any straw, including the idea that Ami somehow saw a deeper sense in them, because that would mean that at least there *was* sense in them. But I got the feeling she didn’t actually believe it.

Oh, and when she calls Ami “our only hope”, did you think back to Star Wars? “Help me, Ami-chan Kinobi! You’re my only hope!” 😂

I haven’t seen enough Star Wars, but you’re right, I don’t think Minori is confident about Ami’s perspective being the most correct. It’s against Minori’s nature to critique things as harshly as Ami, which is partially why Ryuji calls her a kind person. The fact that she tries to believe in Ami anyways furthers this “kindness.”

Ami’s dabbling in “adulthood” was brought up at length in the last episode, but boy, the innuendo in this episode’s first scene certainly hit it home. Of course, Ami herself isn’t as mature as she encourages others to believe (she was photographed with a giant dog, baka!), but perhaps she does have some insight to offer.

Primes: That does rather put a Freudian slant on the whole episode, does it not? Kitamura’s superego can no longer constrain his id.

Pretty valid based on Kitamura’s fidgety reaction to Ami’s talk about the “dog” in the beginning. He then proceeds to break loose for the rest of the episode.

Next, we have Minori’s response to Ami’s reaction. I was surprised by the extent to which Minori looks up to Ami when she talks about being too immature to understand Ami’s perspective. Ryuji calls Minori “kind,” but Minori insists that she’s selfish and arrogant. I see it as Minori’s reflection on her role as a constant supporter in the lives of her classmates, rather than someone more vocal about personal/interpersonal complications. She tries too hard to sound cheerful, innocent, or cryptic, but none of these speeches reflect deeper, more personal views. The UFO speech was probably the furthest she’s ever gotten. This is Minori’s escapism. 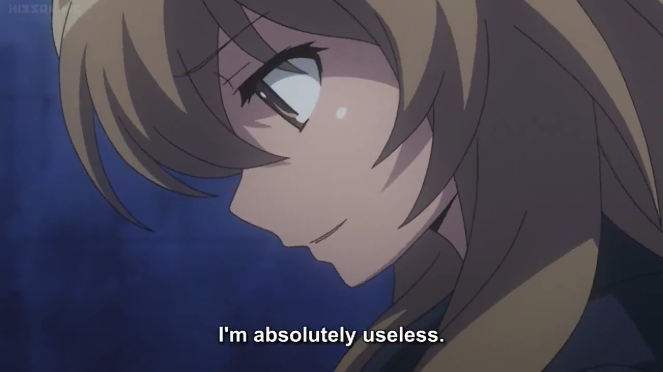 Taiga, too, is made to reflect on herself by Kitamura’s dramatic rebellion. She feels guilty for being unable to help Kitamura in a time of crisis, and even moreso for not actively having the desire to do so in the first place. Again, genuineness is brought into question. Then, Ryuji points to the stars and Taiga utters some 5 Centimeters per Second-esque line about the distance between people and the impossibility of true understanding. Ryuji responds by saying that as long as you’re trying, the distance is being closed.

I think this is about as good as advice gets for this. He doesn’t deny that there is distance or suggest that its possible to completely overcome it, but a step is a step.

Primes: I would add that when it comes to love and relationships, romantic or otherwise, Ryuji’s words can also mean that you have to proceed step by step. You can’t skip ahead or imagine you’re further on your journey towards the other person than you actually are, or you risk wrecking the whole thing.

^^^ Words of wisdom from a married man.

Lots of introspection and philosophizing in this episode. I’ve read complaints before that the author of Toradora! is forcing too many of these lines through the mouths of her young characters, often without sufficient context. Teenagers are perfectly capable of introspective conversations, for a fact, but does it really feel too stiff at times?

I had a stage when I loved to initiate such dialogues with anyone I knew well enough, and I guess the only difference between that and Toradora! is that it usually happens in a clumsier manner, with more hesitation, odd looks, and “idk”s. Toradora! has an unusually articulate and sincere ensemble. Maybe the author uses her characters as mouthpieces sometimes, but for now, I think it works.

Primes: That’s a really excellent question, Moya, surpassed only by your answer to it. Storytelling of any sort is an art, and must select certain aspects of reality to stylize and mimic, sidelining other aspects of the real world as a necessary consequence. It’s thus possible to level the charge “Unrealistic!” at *any* story. Personally, that doesn’t bother me: I put the “fan” in “fantasy” (not to mention the “I” in “isekai”!), so I have a high tolerance for “unrealism” of this sort!

What matters more is that the story adhere to the form that it has established as realistic for itself. And this Toradora! and its reflective romantics do quite well.

Totally agree, though I do think “unrealistic” is a valid criticism depending on the genre. A slice-of-life, drama, or romance with an all-human cast should probably reflect the real world to a greater extent (unless it’s a 4-koma comedy). Then of course, the definition of “realistic” still varies from person to person.

For more constructive criticism, consistency within the diegesis is truly the more reliable standard. With the exception of occasional lapses in art style, Toradora! does a good job at being consistent!

That’s it from us today. Hope everyone’s having a wonderful Mother’s Day (I’m taking my mom and grandma out for lunch!), and we’ll see you next time.