Surprise! It’s a first impression discussion post near the end of April! But it was a fun discussion, so I hope you enjoy reading it to some extent. I like to babble sometimes, but there shall be no babbling because the following post is quite long. Like, twice as long as any post I’ve ever published!

1. What are your general thoughts on this episode?[Mandatory]

Ufotable did a good job, but…the CGI was a bit obvious in spots.

Very very nice introduction to everything we can expect from Kimetsu no Yaiba. Most of the things we get are snippets of what to expect, but they are more than enough to get a good overview. There’s the intense action sequence, the great OST, the generally smooth animations with sprinkles of 3DCGI that in this particular episode was obvious sometimes, although I suspect the obviousness is moreso a common trait of anime scenes that deal with snow rather than it actually being ufotable’s fault. Overall, great, amazing, fantastic.

They even sneaked a 3DCGI (questionable, might be real life) pigeon past me! [Image]

A viewer-friendly introduction to the story (I’m someone who hasn’t read the manga, by the way). To be honest, I found the first half a little flat. Storywise, it didn’t manage to make me care enough about Tanjiro and his family, so the effect of the tragic slaughter wasn’t as great on me as I felt like it could have been. But overall, I think Kimetsu no Yaiba is off to a smooth start, cool setting and OST considered.

I’m coming from a similar place as Moya here, not having any exposure to the series previously, but I was reasonably impressed with this first episode. The artstyle is pretty, the animation is smooth, and the music seems to be pretty dang great. While the first half of the episode was a bit slow, the latter half more than made up for it, and i’m certainly excited to see where this goes next.

2. Did the episode fit your expectations, and in which ways did it differ from it?(If it does) [Mandatory]

It’s basically a beat-for-beat version of the manga…that’s not a bad thing in this case. The only place where it caught me by surprise was when Nezuko grew larger, which couldn’t be adequately portrayed in still images anyway.

Yes. The opening song at the end gave me all the things I expected to see, but EVEN BETTER! Like, WOW, the effects on the swords, the…things that will probably spoil the rest of you so I’ll refrain from talking about…etc. Either way, the portrayal of important scenes in this episode was excellent. I’m so looking forward to more.

Didn’t deviate too much from my expectations of a dark action shounen. The opening scene with the bloodied snow did catch me off guard by setting the tone just a shade darker than I’d expected, but the rest of the episode unfolded without too many shockers.

I’m really not sure what I was expecting coming into this, but a darker action series is right up my alley. Blood? Bring it on! Swordfighting with ufotable behind the animations? Even better. This series seems to touch a lot of my tastes just right.

3. What do you expect to happen from here on out?(and why) [Mandatory]

Well, I kind of know what’s going to happen because I read the Shonen Jump preview of 3 chapters…even without that, it’s pretty obvious Tanjiro will seek out this Urokodaki guy.

I expect the animations to get even better, especially during the action scenes, which there are a lot of in Kimetsu no Yaiba. Ufotable’s adaptation of the Fate series gave me so much high expectations from them that I doubt they will fail. They did semi-fail on Katsugeki/Touken Ranbu but that was moreso the source’s fault for not being a good source of plot. As a manga reader that followed Kimetsu no Yaiba, I can promise you that won’t happen here.

Tanjiro’s gonna get into the demon-slaying business and gain some friends, and we’re definitely getting a backstory arc on Giyu. Nezuko’s role in the story is what I can’t really predict, but I doubt she’s going to turn back into a human.

My greatest hope honestly stems from that OP sequence… If the fight scenes are even half as nice as that sequence makes them look, i’ll be happy.

As is to be expected, the scene where Tanjiro shows his battle prowess to Giyu Tomioka (for some reason, I really like referring to Giyu by full name – it has a nice ring to it). It really shows the potential for the series as a battle shonen.

Has to be when Tanjiro discovered the tragedy. The background song fit the situation perfectly, and it seems that I really do am a sucker for traditional instruments being mixed with modern tunes, because it gave me goosebumps. Either way, the direction of that scene was just :ok_hand:

I have to agree with Ply. It’s when Tanjiro discovers the rest of his family in the hut for me. As he turns to look in, we know what’s going to happen, and Tanjiro seems to smell it already too. The dread was palpable, especially when the “camera” zooms away from Tanjiro’s horrified expression to allow the hut’s dark walls to frame the screen (sorry, I just took an anime analysis class, and can’t stop thinking about “camera” techniques). The excessive amount of blood we later get to see is so ufotable.

It’s hard to pick, but I think out of everything, the scene where Tanjiro discovers his dead family was definitely the most eye-catching and dramatic scene of the whole episode.

The obvious answer would be Tanjiro, but I’ll side with Nezuko on this one. I noticed when I was reading the manga there were no leering angles despite her being in a state of undress due to the demon attack (which carried over, thank the anime’s creators), plus the fact she still shows empathy despite potentially being a ravenous man- (or Tanjiro-…?) eater is commendable, as Giyu notes.

Nezuko! I love her voice and character design, especially that splash of reddish orange at the tip of her hair. Also, she was the only family member I cared more about from the beginning, probably due to the in medias res opening scene.

Definitely Nezuko. As a big fan of Fran from the Fate series, I can always appreciate a girl who can only communicate in grunts… plus, i’m weak to purple eyes. Her design is just fantastic, and that she was able to regain (even a semblance) of her humanity through her demonization is just great. I hope she gets some more development through the series.

Like I said in Q 4, the scene where Tanjiro shows his potential for battle to Giyu Tomioka, because Tanjiro’s skills translate to the series’s potential as a battle shonen.

Although the scene with the tragedy got the most reaction out of me, I have to pick the fight between Tanjiro and Giyu as the high point. The camera direction and soundtrack really shone through, and the animations are not something to laugh at either.
Here’s a challenge for you: Try to find all the places where 3DCGI was used in that fight scene. Yup, there are quite a bit, but it was integrated so well we never noticed. Ufotable at its finest.

I actually liked the opening scene the most. It gave me a struggle to instantly care about, and was visually and auditorily compelling.

That OP sequence… Hot diggity dang are those animations smooth AF. Not to mention the song is an absolute jam… This might be one of those legendary “unskippable” openings.

As hinted in Q 1, CGI. I get CGI for trees, since there’s a lot of them in this series, but not Tanjiro. At least care about your protagonist enough to animate him in 2D all the time.

The slightly noticeable 3DCGI in some places. That’s quite literally the only complaint I am able to raise.

Too much internal narration to me. I get that this being the first episode, the anime wants to make sure you get everything that’s going on. I think the audience is smart enough to infer what characters might be thinking most of the time though, so less says more. Maybe I’m just not used to shounen storytelling anymore, but I wasn’t particularly impressed by Tanjiro and Giyu’s internal monologues. Though Giyu’s thoughts were better than his words. He was a bit too preachy.

The first half of the episode was pretty slow, and I didn’t really get enough time to know Tanji’s family before they’re ultimately killed off. That, and, well, they didn’t do a very good job disguising the CGI in some areas, though at other times it looked fine.

I think for Ply and Astral’s previous collabs with this format, what was missing from this question was the usage of different viewpoints (as in, deviating from the obvious) for this question. To explain what I mean, I’ll use Giyu’s attack from his perspective – I think he was doing a “tough love” sort of thing to Tanjiro there, but it’s in the nature of the shonen hero to show optimism in the face of danger. I probably would’ve given Tanjiro more hints to revert his sister (given Giyu seems to have some leads as to how to do so at this point in time).

(Totally didn’t read Aria’s response and changed my thinking) I think I would pick being Giyu. And realising a guy is protecting his sister even though she clearly turned into a demon. Being the *cough* softhearted *cough* person I am, I probably would have let them go. However, if Nezuko ended up being a problem I probably would have killed her either way. It’s for the greater good, after all.

If I were Giyu, I would fight without talking so much.

While I don’t know his backstory, it seems like Giyu has some sort of trauma to do with demons. If I were him, I probably would have just decapitated Nezuko on the spot, no matter what the punk kid had to say about it. 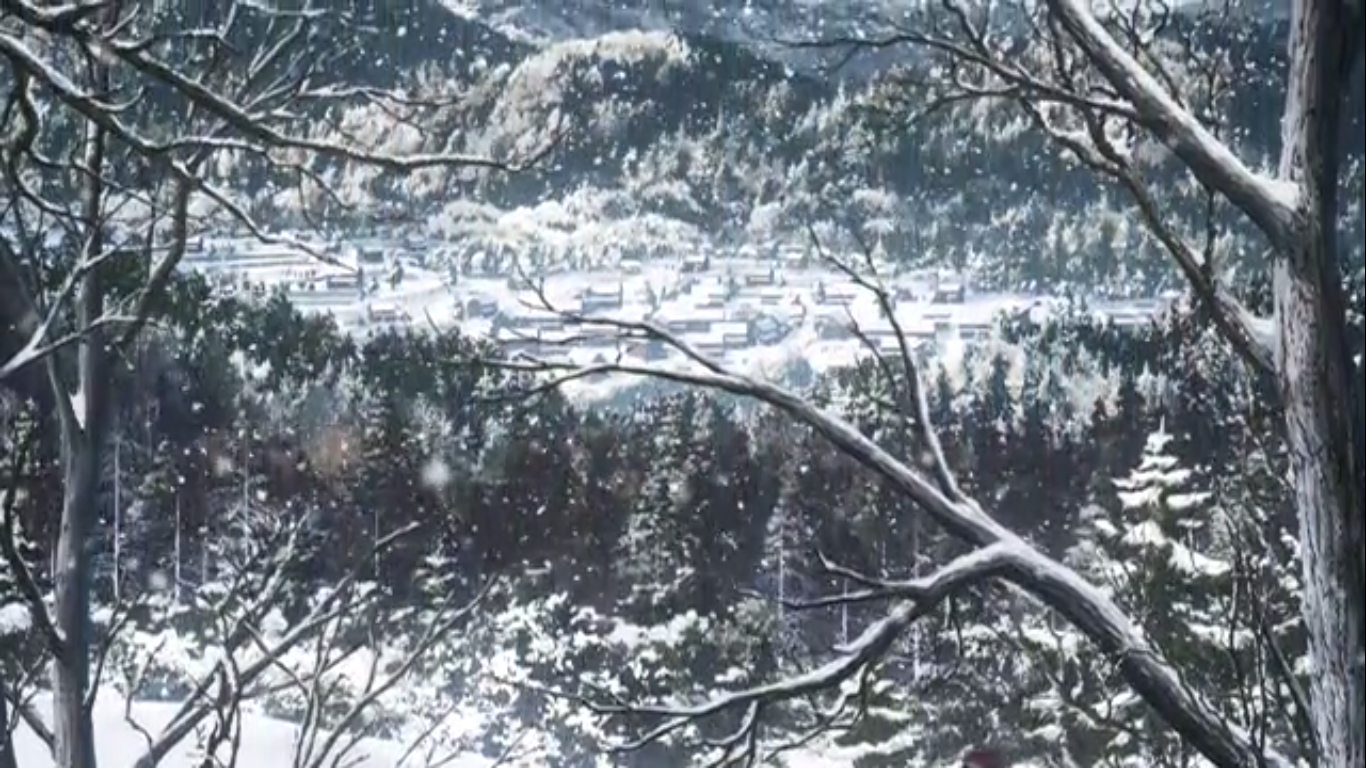 A “calm before the storm” image of Tanjiro’s village…just to prove 2D is better than 3D (LOL). 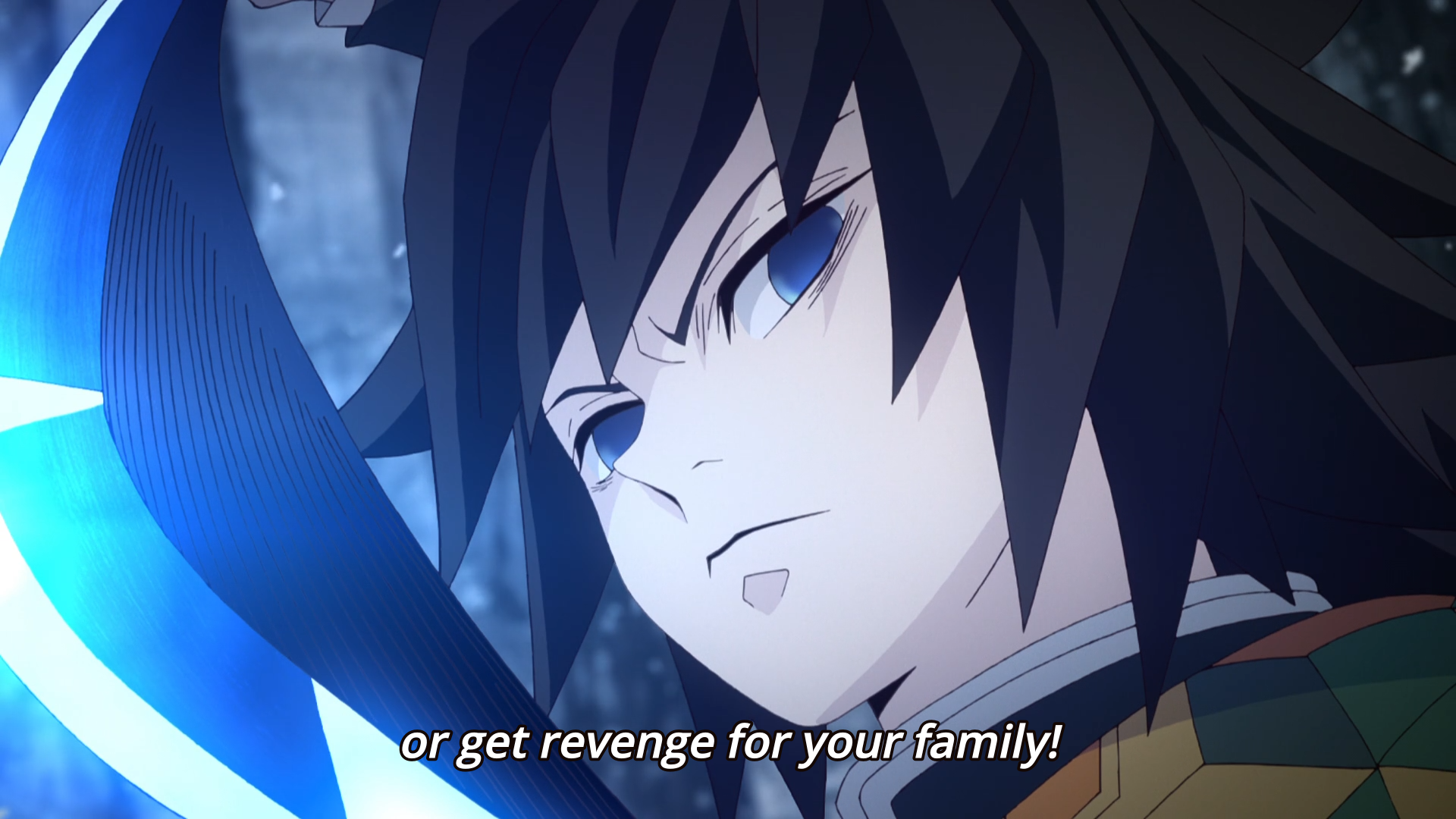 Can someone please turn this scene into a wallpaper engine wallpaper with all the bling bling effects please? Giyu looks like such a badass in this. 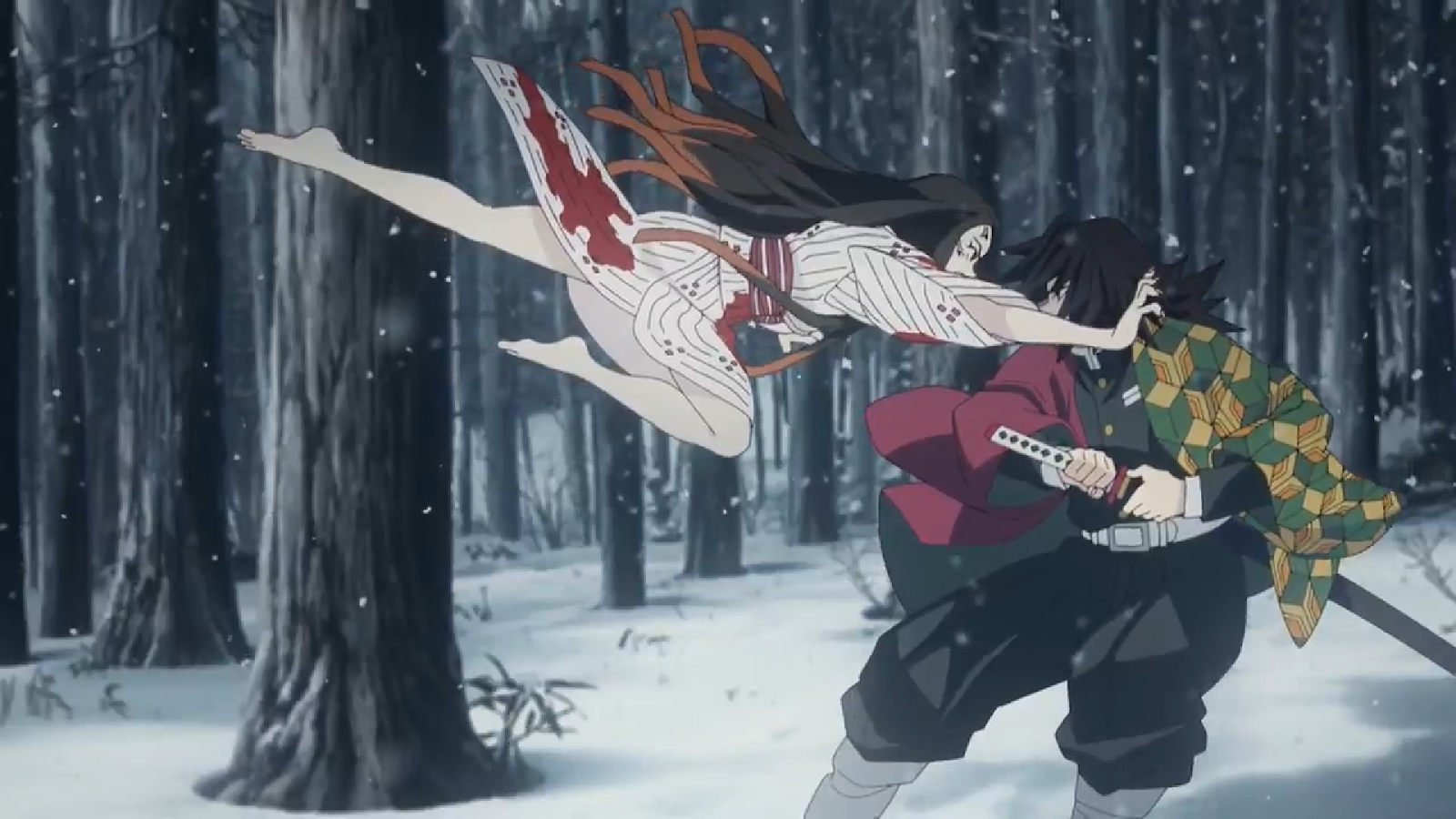 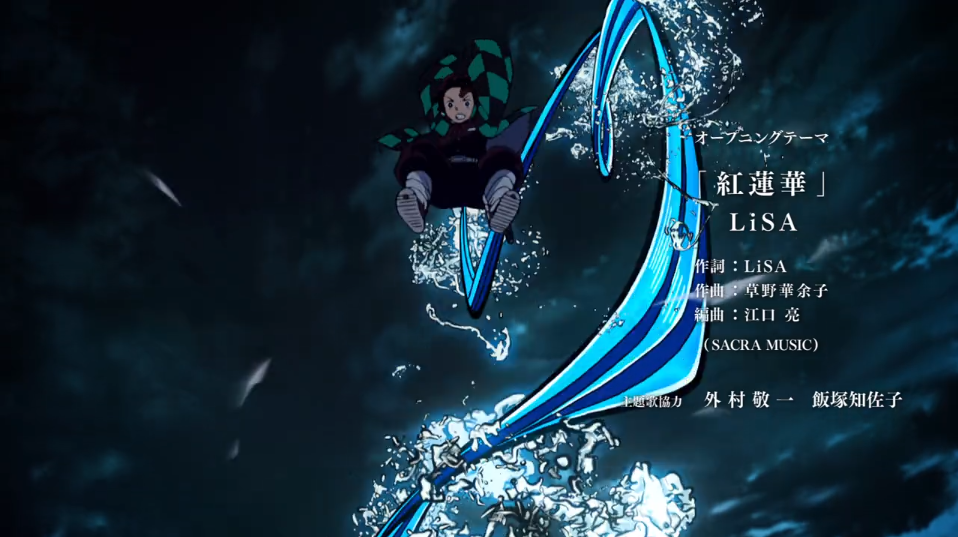 …Hey, that’s not too shabby, considering the last time I did a haiku was for a rewatch thing I did 5 years ago.

That’s that. Keep an eye out for our Episode 2 discussion on Plyasm’s blog, hopefully soon!