Finally, here’s the Kalafina-sung ED of Kara no Kyoukai: Mujun Rasen/ Spiral Paradox – my favourite Kalafina song for the longest time. All four of Kalafina’s members at the time got to showcase their unique voices in juicy, layered harmonies. I do regret to say that I feel like my translyrics haven’t done it justice though. It’s not like the original lyrics were that deep or anything, but translating it into English while still going for loose rhyming (looser than usual too) felt kind of forced this time around. Anyways, I will stop criticizing my translyrics for now and let you judge for yourself.

The rest of the series:

I met you late last night

In a dream never more impossible

In one moment hack down an infinitude

I’m calling for your sake

I’ll stand guard each night so that you’re safe

Reach out to embrace you weakly

Even as they know they’re damned

All there is we’re capable of doing in this life

Is to live another day

Until we screech our throats dry

The sweetness of this gloom

And gallantly make your way through

I’m calling, if I can

With this racking anthem of mine

Turn your face t’wards the sky

Then surely I’ll know that life up to this point

Is not a lie

It overflows and clogs even this plastic heart

Until I gasp just to breathe between every heartbeat

(Towards the vanishing yesterday, I wave my hand

(Eclipsing even the glaring desert sun

And break into one free spree

On this street without you

I wave my battered flag against the wind

From now on for my good

I’ll conquer my path and leave my tracks as proof

Of existing here at the limit of the earth

It’s you I want to meet

It’s you I want to meet

Of having existed in this world

Is verified by one look

Your eyes are the archive for my soul

Defying the spiral circling in

Us mortals who fight

And fade with our violent sobs and screams

Have sung once of our fear

Have lived once right here 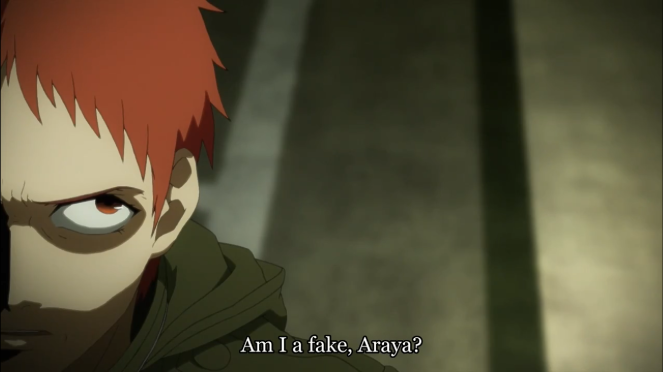 Kajiurago credits go to canta-per-met – the best English fansite for Yuki Kajiura and her singers. If you like this song or Kalafina in general, I highly recommend moment mimura‘s compilation of live performances of the song. Kalafina’s lives are breathtaking. I seriously want to go to one, especially since this year is their 10th anniversary.

3 thoughts on “[Translyrics] “Sprinter” and Kara no Kyoukai: Paradox Spiral”